Who Does This Work?

Oil and gas is big industry. It’s as big as it gets really, which means that job seekers can pursue just about any kind of job imaginable. But since you’re here at JobMonkey the jobs of interested are probably the more offbeat, somewhat adventurous kind. And those types of oil and gas jobs are really our focus in this section of JobMonkey: 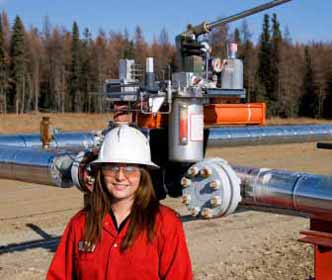 There are a several hundred thousand miles of pipelines moving crude oil around the U.S. and Canada. Many of the pipeline operations originate in remote areas where the oil comes out of the ground. One place that oil comes from is under the ocean. It is pumped from under the seabed by offshore oil rigs, which you have probably seen off the coast of California, in the Gulf of Mexico, or elsewhere.

It’s not a given that this type of work will find you in the far reaches of wilderness but it’s what many people want. You might find work right off the coast of Santa Barbara, California but you could also end up in Prudhoe Bay, Alaska, far out in Alberta, Canada, or somewhere else in the world.

So part of the appeal for many people is ‘location.’ Another aspect of working oil and gas jobs that many find appealing is physical nature of the work. This is a good industry for you if you like working with heavy equipment, using tools, wearing a hard hat, working long hours, and being with others who like those things. To be successful in the oil and gas industry you need to be mechanically inclined, work well in a work team, be conscious about safety, and be good at following directions. Drugs? Don’t think about it. Drug screening is usually mandatory.

Work hours vary from employer to employer and facility to facility. But it’s most common for rigs and refineries to work round the clock, 24 hours per day. Employees may be on the time clock for eight to 12 hours at a time. If you’re on an oil rig working 12-hour days, then you may work for 14 days then have seven days off the rig.

Pay for an entry-level job, such as a ‘Roughneck,’ usually starts in the $15-20 per hour range. After training, and with experience, you can work up to about $30 per hour. This means you can be earning between $180 and $300 per day with 12-hour shifts – plus overtime.

Of course, you will make more money as you work your way up the ladder from entry-level positions to supervisory positions.

You’ll learn more about the different types of oil industry jobs, working conditions, and pay as you keep reading.