Lindsey Vonn. Bode Miller. Ted Ligety. Julia Mancuso. These famous ski racers made the United States proud. However they would not have performed as well on the international ski racing circuit without well-trained coaches.

Compared to other ski-related professions, coaching is a distinctly small subset of the industry. Most ski coaches raced or competed at some point in their skiing career and now want to share their knowledge and excitement for the sport with young athletes. 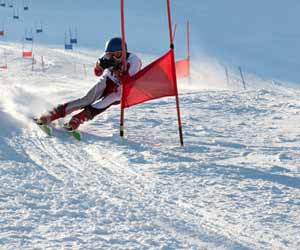 Nationally there are only about 3,000 member coaches of the United States Ski Coaches Association (USSCA), a branch of the United States Ski and Snowboard Association (USSA). There are not a lot of open positions and it takes a passion for the sport to justify the pay, which does not come close to covering the efforts and energy it takes to coach. Nevertheless, for the career-oriented skier, coaching warrants consideration because of the wonderful life-long effect one can have on young athletes.

Where Do Ski Racers Start?

Ski coaches start working with athletes at a very young age. Many skiers and snowboarders get their competitive start doing recreational Nastar races. After they develop a love for competing they join local ski clubs where they can train at their local hill. As they progress and get better they begin competing regionally, collegiately, nationally, and internationally. Each athlete must choose their specialty and excel. It takes a qualified ski coach to make that happen.

While each country has their own certifying body, The United States Ski and Snowboard Association (USSA) certifies ski coaches in the United States. There are certifications in the following niches…

The USSA offers clinics, education, certification, and jobs for qualified, professional coaches. Typically coaches start working with younger children at local resorts before they can find a prestigious job like coaching the US Ski Team in front of over a billion spectators on the world stage. There are events all over the country and across the globe involving USSA coaches.

Is Ski Coaching The Gig For You?

If you think you’re ready to coach some fearless skiers to go full speed on a downhill course or some wily snowboarder how to flip and twist through the air in the halfpipe, consider a job as a ski coach. You’ll spend your ski coaching career traveling the world, cheering at competitions, and wandering race courses in ski boots.

Coaches need a trained eye. Can you watch a racer and tell them how to hit a gate a split second earlier so they can shave a hundredth of a second of their time? Can you help a rider learn to push the limits in the half pipe? Are you able to give small pointers and tips to make an athlete constantly improve? Do you have the drive to encourage your team to be the best in the country? In the world?

Each season, more athletes choose to pursue ski racing or freestyle skiing. This means more coaches are needed each year. Start now and learn the coaching ropes and who know where you’ll be in a few years.

A Day in the Life

Working as a ski coach is hard work. Days start very early in the morning. Coaches set up courses that will challenge the team each practice. The majority of the day is spent standing on the race course in the winter temperatures watching each racer, shouting encouragement, giving tips for improvement, and motivating each competitor.

Coaching is a never-ending process, especially at the higher levels. It’s important to understand racing techniques, equipment, personalities, training schedules, and motivational strategies. Even though the racer gets the medal at the end of the competition, behind the scenes, the coach is the one who deserves the praise.

For more information on ski coaching and ski racing check out some of these websites:

Supervising a bunch of wild colts who are motivated to ski or snowboard as fast as possible doing daring stunts can be a thrilling way to make some money and have fun. With the ever-increasing competitiveness of ski competitions, and as more money enters the upper levels of the sport, there remains a real need for dedicated professionals in the ski coaching industry.