There are many levels of coaching available, both on a part-time weekend or full-time seasonal basis. The majority of coaching programs involve juniors – skiers aged six through eighteen. There are also many college ski racing programs throughout the United States and Canada with paid coaches. At the elite level, there are a handful of coaches who work with the skiers on the U.S. Ski Team and their development programs. In the past few years some coaches have found work as a personal coach for an individual athlete. Because of the costs involved in ski racing, these positions are few and far between. 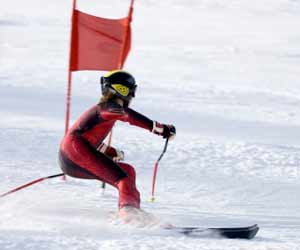 A veteran ski coach says breaking into the business can be the hardest part. Once you’re in, it’s just a matter of sticking with it:

“I started out as a racer when I was a kid. I’ve also lived in the area all my life. A friend of a friend got me a job with the race department about twelve years ago and I just kind of hung around. Pretty soon I was the director of the race department.”

While openings are still somewhat limited, coaching is an area with a promising future. Because skiing in North America is still a relatively new sport compared to traditional activities like football, baseball, and basketball, there is still plenty of room for innovation. There is also room for new competitive disciplines, such as snowboard, freestyle, and telemark ski racing. Another reason coaching will be more important in the future is because parents are increasingly more concerned about getting their kids involved in wholesome outdoor activities that fill most of their free time, eliminating the potential for involvement with the illicit activities or violence prevalent in today’s junior and senior high schools.

While there are a number of outstanding women in the ski coaching field, they constitute a slim minority of active coaches. Recently, some forward-thinking race programs have made an effort to recruit women into coaching positions. One benefit is that many female athletes prefer having a woman coach available in cases where they might not feel comfortable talking to a male coach about personal issues affecting their performance.

Traditionally, the profession has been male-dominated, and women have had to overcome a certain amount of sexism, even if unstated. Hiring practices in many programs have been through the “good old boy” network, where being able to out-ski, out-jump, and out-drink anyone else on the mountain has been an implicit precondition to acceptance. Successful female coaches universally have rugged constitutions. Much of coaching involves skiing down the hill in harsh snow and weather conditions while carrying anywhere from thirty- to fifty-pound bundles of gates or fifty-pound sacks of rock salt on their shoulders. Weather has to be particularly inclement before training is canceled. Rain, fog, snowstorms, and biting cold temperatures come with the territory.