Bob Hollingsworth was on the National Ski Patrol (NSP) as a volunteer for more than twenty-nine years. He was a Senior Mountaineering Instructor for his local patrol, and one of the contributing writers to the original Mountain Travel and Rescue textbook, an advanced how-to book for the NSP.

It’s a challenging endeavor. The mountains in winter can be damn savage. You can start out in the rain, and as you climb up, sweating under a heavy load of gear, the temperature goes down, so then you’re wet and freezing.

Required duty days for me are every other Saturday, but I go up a lot more often than that. The day’s team is on the hill by 7:30 am, setting boundary ropes and poles, checking for hazards. The pro snow controllers have been out a few hours by then, ski checking, blasting – whatever it takes to make the hill safe. 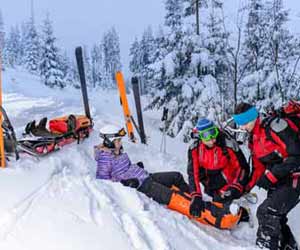 In addition to our regular ski duty on the hill, the special group trained in mountaineering rescues are always on standby to be called into the wilderness, to go out and take care of the sick or injured in more remote settings. That’s becoming a more dominant problem because more people are into out-of-bounds adventure skiing and snowboarding. Their numbers are going up.

The ski mountaineering program has been in place for a number of years. Our main function is to scrub in on the emergencies and rescues, both in the back country and, just as important, the uncontrolled areas within the ski area – the cliffs, chutes, and woods.

We’re geared up with a group that can take off to the backcountry. You’ve got to be concerned with your own survival so that you don’t become part of the problem. We’re all trained to be self-sufficient, to pull the job off. It’s enough of a problem to go get someone without putting ourselves at risk. We don’t go in with circus tents and space heaters; we have to improvise. Even if we carry in a tent, it’s likely that three or four people will end up in a two-man tent for the night. More likely we’ll have a small backpack stove, and will have to improvise a shelter by building a snow cave or igloo.

A lot of the ski mountaineer patrols around the country are not into high angle rope and basket rescues. It’s not required by the National Ski Patrol. But in the Cascades, we are. Because of the terrain, even within the area boundary, people have to be plucked off rock faces in foul weather. Choppers can only fly at altitude in good weather.

Mountain rescuers work under an “incident command system,” like that used in mounting forest firefighting efforts. A large-scale rescue effort involves a lot of other agencies, like the National Guard, four-wheel-drive groups, helicopters, and other mountain rescue groups.

In a lot of places now, the pro patrol is doing the snow control, the avalanche work. They do the ski checks, trying to cut slabs loose from above, and blasting. Those can include hand charges, avalaunchers, or 105mm recoilless rifles for the areas that are not skiable.

We’ve got to be concerned about liabilities. To a certain extent, patrollers are protected by state good Samaritan laws, laws saying emergency rescue efforts by people who stop to help are done in good faith and are not liable.

But patrollers as a whole are far less comfortable today relating to the issue of litigation than ten years ago. Back then you gave it your best shot. You worked under emergency conditions and you were the only game in town. But today, with eager attorneys pushing on some people pretty hard…

We’re volunteers, mostly, not doctors, not nurses. We train hard to become proficient, but under the adverse weather and terrain conditions, and the way people are suited up – compared to on the street – it’s more difficult to perform a full patient assessment. We’re already fighting hypothermia and shock in freezing conditions without taking the victim’s clothes off in freezing wet weather.