Justin Homan worked at a Snoqualmie Pass ski resort near Seattle, Washington. Justin is a student at the University of Washington and teaches snowboarding on weekends and weekday evenings.

I’ve been skiing most of my life and just took up snowboarding two years ago. Last year I saw an ad in my college paper for snowboard instructors and decided to apply. They arranged for a whole group of us to show up at the resort and participate in an instruction clinic. The instructors evaluated us, gave some lessons on technique, and had us teach a boarding skill to the rest of the group. They weren’t really looking for highly skilled boarders but they did want people who were good teachers and employees, so basically if you were a capable snowboarder, had a good attitude, and went to the other required clinics, you got hired. 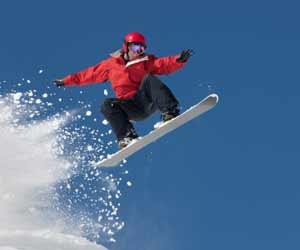 We had thirty snowboard instructors and about 100 ski instructors, which is about the ratio at most Northwest resorts. Some of the instructors were full time, but since snowboard instructors were in such demand we were given a lot of latitude in our hours and a lot of people taught part time like me. If you’re a ski instructor and can’t work the hours they want, they might just hire someone else, but with snowboarders they’re more lenient because it’s harder for them to find a replacement. The full-time instructors get free lodging right at the resort and snowboard every day, but they’re basically on call in case someone wants a lesson at an odd time. The part timers can ski free even on days we’re not scheduled to work, but when we go up we’re supposed to carry a pager in case they need us for a lesson.

A lot of resorts still consider snowboarders a bunch of punk kids, but the attitude is really changing now because of the sheer numbers of boarders on the slopes and the number of people wanting to sign up for lessons. They really have to pay attention to boarders these days if they want to make money for the resort. I get the sense from the owner of our ski school that he would like to concentrate on ski instruction, but he just can’t ignore snowboarding anymore because of the huge numbers of people who want to try it. Four years ago we only had two or three snowboard instructors, and now we have more than thirty and are looking for more, which really shows you how the sport has grown. Whereas ski instructors might only have to teach a couple of lessons and then ski the rest of the day, the snowboard instructors usually have to teach every time we’re on the mountain, which is fine because we make more money that way.

Snowboard teaching is a lot more relaxed than ski instructing. The supervisors in the clinics are more relaxed; you pretty much just go up and free-ride and get evaluated. At ski clinics, you have to make specific turns and do specific drills. I think it’s because snowboarding is such a young sport that techniques just haven’t been formalized yet. Skiing has been around so long that there’s a set pattern of teaching that’s used all over the world, but snowboarding doesn’t have that kind of tradition. Basically, our supervisors just say “these are the three things you need to know; just try to show your students one or two of them today.” Of course, now we’re starting to get a little more structure in the classes; just like all ski instructors start out teaching the snowplow and then christies, we teach toe edge and then heel edge, and we use a little scorecard to keep track of different skills.

A lot of snowboard instructors haven’t ever had any instruction themselves, but the resort gives us clinics on techniques. During the year we have four or five clinics where expert instructors ride with us and point out techniques that can improve our abilities and help us think about what we should be teaching the students. I learned a lot about teaching other people in those clinics, and it made me a much better instructor. There is certification for snowboard instructors just like for ski instructors but it’s not required; I’ve been teaching for two years and still don’t have any certification. Since snowboarding is so new, not many instructors have certification, but it can be worthwhile in that you get better pay and get to teach more advanced classes.

If someone’s any good at snowboarding and likes to teach and work with kids, I highly recommend that they try to become an instructor. The demand is huge and it’s a great way to get paid for doing something you love.