One of the most memorable parts of any flight experience has to be remembering how you were taken care of by a flight attendant. In fact, many people judge an airline by how they were treated. Excellent care means a well-liked airline and they will probably fly on that airline again. Poor treatment – well, you know, that passenger probably won’t be seen again on that airline. 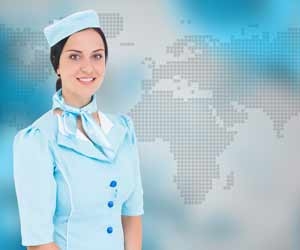 The important thing about flight attendants is that it’s about quality people getting quality training. Here is a look at the airline flight attendant duties and training that can be expected when you go into this fun field.

Once you’re hired as a flight attendant, get ready for weeks of intensive airline training. Most airlines conduct the training at their home office, and the course usually lasts four to six weeks. The length of time depends on the size of the airline and the aircraft. Trainees usually are not paid during the training period, but room and board are often provided, and transportation to the training center may also be provided. You need to be aware that some airlines may charge you for the training.

During training, flight attendants are drilled on all aspects of their future duties – emergency evacuation procedures, first aid, CPR, and even hijacking procedures and passenger psychology are studied. New hires must also learn FAA regulations, food and beverage service procedures, how to assist unaccompanied minors and handicapped passengers, and all company policies.

As a longtime flight attendant adds:

You also learn about the various type of aircraft that the airline operates. You have to be proficient on all types of equipment because once you complete training you could be working on any type of plane.

At the end of this rigorous training, students must pass an FAA emergency procedures test and satisfy the instructor that they have adequately learned all of the information in the class.

After graduation, flight attendants usually report immediately to their assigned base of operations, sometimes working a flight the following day.

Part of the training period will be to find and eliminate candidates that do not measure up. Since more candidates than job openings usually apply, there will be some extras that will not make it through the school. You will need to perform, alone at times, in front of the training staff. There will also be written tests about what you learned in the way of company practices and FAA regulations. For those who will be working on international flights, there will also be training in passport and customs regulations. Near the end of the training period, candidates (you are not considered an employee until graduation) will go on a few flights and practice what they have learned with real passengers.

When they graduate, they will be given the FAA Certificate of Demonstrated Proficiency. This certificate is only given for a specific type of aircraft. Then, every year, they will be required to go through some retraining and will need to pass an FAA safety exam in order to maintain their certificate. This program may include new information about procedures from the company, the FAA, or the TSA.

Airline flight attendants need to be in good health, and this will be checked while they are being trained. They will need to be able to lift up to 45 pounds above their head and put it in the overhead compartments. They stand during most of the flight and are constantly stooping and sometimes push heavy carts. The Bureau of Labor Statistics mentions that flight attendants typically have a higher than average rate for injuries and illnesses. Medical problems may also arise due to working in pressurized air, breathing recycled air, the stress of dealing with demanding passengers, and working irregular hours.

It is also among the airline flight attendant duties and training that they need to speak clearly. Remaining calm – even when very tired or when facing an irate passenger – is essential, too. Part of the training will also deal with weight control, and employees are expected to maintain a good physical image. Grooming is another issue, and they are expected to always look their best, and keep their uniforms looking good – for which they will probably receive an allowance.

For some flights, a flight attendant may be expected to work up to 12 hours per day, but they may actually work up to 14, and possibly longer on international flights. On the average, they can expect to fly between 65 to 90 hours a month. There will be about an additional 50 hours a month ground time while the plane is waiting to takeoff, waiting for a plane to arrive, and for writing reports and attending pilot briefings.