If you enjoy taking to the skies, becoming an airline pilot is one of the best ways to do it. They are frequently in the air, have control of the aircraft, and are traveling all the time. While many pilots fly more local routes, others travel to international destinations. There are rather strict airline pilot qualifications for becoming an airline pilot and it will take some time, but it will be well worth the effort once you sit in the pilot’s seat. 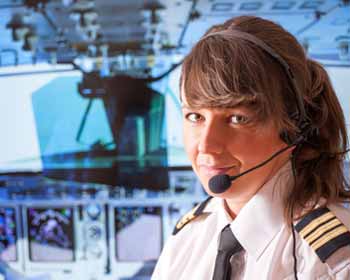 As far as job growth is concerned, reports indicate a major demand for new pilots – more than for other jobs. They also expect a large increase in the number of commercial and cargo air traffic – which will mean job security and opportunities for advancement.

Airline pilots are responsible for the smooth operation of the aircraft. Because they are the senior officer on board, they make the final decisions about anything that happens on the aircraft. While the co-pilot (also called First Officer) is performing a general flight check of the aircraft, the pilot will be in the pilot’s lounge where he or she can view the flight information, the weather, and information about the crew members. Then, the pilot meets with the crew to see if there were any problems, plans their route to the next destination with modifications (if necessary), and files the flight plan with air traffic control. The last thing is to check the instruments and switches with the co-pilot.

Did You Know? The official language of air traffic controllers and pilots is English and it is designated such by international treaties

Pilots will generally actually fly the plane about half of the time they are in the air, sharing the other half with the First Officer. Of course, most planes have auto-pilot, but the pilots are still responsible to watch the instruments for possible problems. In the event of an emergency, the pilot is responsible to take the required action that should provide the best solution.

While the job of flying is both prestigious and somewhat glamorous, a pilot’s work is not always easy. They are often away from home, may fly irregularly (40 hours one month and 85 the next), and they have variable work schedules. Commercial airline pilots are limited by the FAA to flying a maximum of 100 hours per month, and a maximum of 1,000 hours per year. They also work about an additional 140 hours per month in non-flying duties such as waiting for aircraft to arrive and for takeoff.

Being able to handle stress is part of the job due to the responsibilities of taking care of many passengers and multi-million dollar aircraft. They must be alert at all times while flying, and ready to take control if an emergency situation should arise. Some airlines may require that a pilot be ready to fly within one-and-a-half hours.

It is not necessary to have a college degree to get a small plane pilot’s license. However, college is instrumental to landing a job as a commercial pilot.

Although no specific type of degree is necessary to meet airline pilot qualifications, courses in math, English, physics, and aeronautics will help land the job. The most critical qualification for airline pilots is FAA certification. The type of certification varies depending on the type of plane you will be flying, but typically it is an airline transport certification with training specific to the type of fixed-wing aircraft you’ll be handling. Other certifications may be required, such as an instrument rating, night flying, cross country, but it will depend on the type of aircraft you will be flying. There are also a minimum number of hours you’ll be expected to have already flown; 2,500 to 5,000 is an average figure.

Pilots will also need to meet strict physical requirements, too. The FAA wants to ensure that passengers and crew are safe (as well as people on the ground). Psychological and attitude tests may also be required. While some airline pilots are hired from corporate flying, most come from commuter airlines who have had military aviation careers. People with a new pilot’s license can expect to slowly move up to larger aircraft and eventually to commercial aircraft.

Traveling has its privileges – especially for pilots which make meeting airline pilot qualifications worth it. When a pilot reaches their destination, if they have been flying for a shift, the airline will provide for a hotel, transportation, and it will also give a pilot an allowance for meals and other expenses. Other job benefits can be expected to include medical, dental, and vision coverage, life insurance, a 401k with possible matching of contributions, and travel benefits.