While every crew member of a commercial aircraft has an important function, there is none greater than that of the pilot. Even before the flight begins, the pilot (also called “Captain”) is responsible for everything that occurs on the ground, during the flight, and until it is safely parked again. 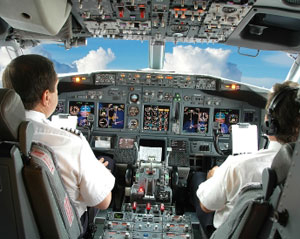 Commercial pilots receive a lot of training and experience before ever being allowed to take full control of a large aircraft. While pilots are rarely seen by the passengers, every passenger appreciates a pilot who handles and manages the plane well.

Because the aviation industry is growing now, there will be a need for more pilots, who are only allowed by the FAA to fly a maximum of 100 hours per month. Pilot’s jobs are expected to grow at a rate of about 12 percent per year.

Pilots are responsible for the operation of the aircraft, the safety of the passengers and crew members, and all flight decisions once in the air. Their primary concern, however, is the safety of the plane and passengers. They must maintain a highly professional image in both conduct and personal appearance, and communicate with the passengers and crew during flights. The pilot makes all final decisions about anything occurring during the flight. Some pilots may also be approved by the Federal Flight Deck Officer program and may carry firearms to protect the cockpit.

Did You Know? Pilots who are newly hired at a major airline will often have about 4,000 hours of flight time.

Airline pilot duties are very limited when working with large airlines, and they will have almost no other responsibilities. They will check the weather, then plot a flight plan. During flight, they constantly watch instruments, make adjustments, report to air-route control stations enroute, and talk to the tower at their destination. When working in a smaller plane, however, the job may be much more physical. This could include loading passenger luggage, supervising fueling, performing aircraft maintenance, and more. All pilots are responsible to fill out records and reports, Pilots and co-pilots often take turns flying different legs of a flight.

Pilots typically report to work an hour before departure in order to meet with flight crew and review weather and airport conditions. The captain then goes through a series of safety checklists of switches and instruments in the cockpit with the first officer (co-pilot). Every instrument is checked and double-checked. In addition, the captain communicates with the air traffic controller and the ground crew in preparation for takeoff. During takeoff, landing, and during the flight, the pilots continue to communicate with one another as well as with the air traffic controllers. The hardest part of the flight is during takeoff and landing.

Pilots often are required to stay away from home for extended periods. Their schedule often changes, too, and it may be highly irregular. Mental stress is often high for pilots, and this may be somewhat worsened by jet lag – for those who fly internationally. They are required by the FAA to have at least 8 hours of uninterrupted rest within a 24 hour period.

Having a college degree is usually expected of pilots – but it is not required. Many pilots have college degrees in totally unrelated fields, and military officers will all have degrees. Pilots must start getting licensed on small planes and then slowly move up to larger aircraft. Airline schools are also available, and candidates will need to pass simulator tests (which must be repeated yearly), instrument rating tests, and more. Because decisions often have to be made quickly, and because money and lives are at stake, pilots will also usually be required to pass psychological and attitude tests, too.

Becoming an airline pilot also requires that a pilot have a number of flight hours, too. Most airlines require that a pilot be at least 23 years old and have at least 1,500 hours of flight time to get started. They will also need at least 40 hours of flying by instrument training to receive this license. If accepted, they will then go to ground school to familiarize them with company policies and to get additional training. Once this step is completed, their airline pilot duties will probably be to start out as either a flight engineer or as first officer. To actually be able to sit in the pilot’s seat, most airlines want the pilot to have more than 4,000 flight hours.

Airline pilots are probably one of the best paid jobs in the United States. The salary for pilots ranges between a low of about $36,000 (with some benefits) up to more than $250,000 (including some benefits).