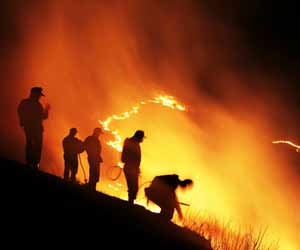 The largest firefighting agencies are the U.S. Forest Service and the Bureau of Land Management. Other agencies that hire forest firefighters in smaller numbers include the National Park Service, the U.S. Fish and Wildlife Service, and state parks.

Hotshot crew members and smokejumpers are the “big shots” of the firefighting world. They are extremely well-disciplined, highly trained, and specially equipped to fight huge wildfires. One veteran forest firefighter gives this insight:

“Firefighting is dirty, hard, and boring; and a lot of the time you’re wondering if the people in charge, usually referred to as ‘overbellies’ for their most common physical feature, really know what’s going on. Someone in the Forest Service decided that firefighters need 7,000 calories a day, so there’s lots of food, if you like ham. Some people call the menu ‘Death by Ham.’ But the people in the nearby communities are always great. They think a forest firefighter is the closest living thing to Superman, and they’d do anything for you. They bring out everything from ice cream to live bands. I fought fires all over the west – Colorado, Utah, Idaho, California, Oregon, and Wyoming. It was a good time and helped me pay for school.”

As mentioned above, there are three main firefighting positions; those areas are further described below. Job seekers should also remember that fighting fires is a concern for anyone working outdoors. If there is a wildfire where you work, no matter what your job title is, chances are you will be involved in some capacity working to put that fire out. An unplanned burn means costly destruction and potential for loss of human life. Everyone should be prepared to take action if there is a fire in the area.