My daily routine varies depending on the season. Early in the field season we get up at about 4 or 4:30 in the morning and trap birds. 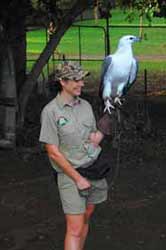 Then by mid-morning, around 9 or 10, we’ll have put radios on them and have started the tracking process. We monitor birds on a daily basis, tracking them by vehicle. We also try to find nests. That’s been a big part of what I’ve been working on, developing the techniques to track birds.

I also perform odds-and-ends jobs for the service. For example, I might assist with surveys and collect field data. I have more refuge responsibility this year, and I’ve been helping gather waterfowl data, including counting goose broods to find out how many goslings there are on the refuge. There are several birds that nest in colonies, so we take photos from the air and try to estimate their populations. We conduct a duck brood census. I don’t get so involved in big game because I’m in school by that time of year.

I grew up on a small farm in North Dakota and have always wanted to work in the outdoors. I went to a two-year university in North Dakota, where I took up the wildlife management program. But it’s hard to get an outdoor job with a two-year degree, so I transferred to the University of Montana. While there I volunteered with a lot of the different capture programs. I captured big game and helped with research. Along the way I spent a summer for the forest service as a bio tech doing studies in the Bitterroot Mountains outside of Missoula. I also worked for North Dakota parks. Then I spent six months as a wildlife biologist doing research.

When I entered graduate school I began working on a project studying American Bitterns, which are marsh birds similar to Great Blue Herons. This became a cooperative agreement where I’d work 50 percent of the time on refuge duties and 50 percent on this project. This is my third summer here, and I’ve gained valuable field experience through my seasonal work, and hopefully when I graduate this fall, they’ll be able to offer me some type of full-time position.

One of the rewards of the job is getting to see these birds return to their natural areas safely and knowing we’ve accomplished something. There’s a lot of variety in this job. And of course, just getting to be outside so much I realize that there are so many things that we take for granted. Seeing the sunrise is quite inspiring.

Some of the difficulties are that you’re more isolated from the public than you would normally be in the city or with a different job.

It’s tough on family life. You tend to spend a lot more time in the field than you do with your family. It can be a big adjustment.

One of the biggest things that would help an individual get a job is to be talking to people already employed in the field. Be persistent about it. Contact the right individuals. I’m entering a job search phase of my own, and I’m constantly pushing and contacting people. One of the first things my professor in college told me was that there are no jobs in the outdoors and that I might as well pick a different subject of study. But I was hard-headed and pursued it anyway. If that’s what you want to do and you’re committed to it, you shouldn’t have too much of a problem.

My advice to those looking for a job in the outdoors would be to work hard and take a lot of seasonal jobs – even after you graduate. If you can get involved even a little that’s a big plus. For anyone who is really oriented toward the outdoors, wildlife management is a good profession.