In the wake of Europe’s vast deforestation and the United States’ own ongoing massive logging activities, the Division of Forestry was created under the Department of Agriculture in 1881 to regularly study forest conditions. 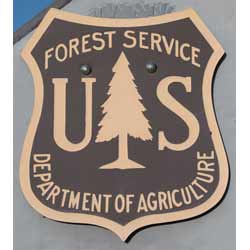 In 1891, the Forest Reserve Act authorized the President to withdraw public domain lands for use as National Forest Reserves. But by that time much of the nation’s eastern and midwestern timber stands had already been depleted. In fact, almost 90 percent of North America’s original forests had been eliminated. In 1905 President Theodore Roosevelt addressed these problems by transferring the Forest Service from the Department of the Interior to the Department of Agriculture, a system of district and regional offices was created, and the modern U.S. Forest Service (USFS) was born. The government’s first large-scale hiring of outdoor workers was done by the Civilian Conservation Corps in the 1930s to plant trees, prevent forest fires, and improve recreation within the nation’s forests.

The booming economy of the 1950s increased the demand for timber, and for the first time widespread logging began on national forest lands. As this practice grew and wilderness areas became more difficult to preserve, the Forest Service found itself at the center of a conflict over public land management. To help ease the battle between conservationists and private industry, the government passed the Multiple-Use Sustained-Yield Act in 1960. This directed the Forest Service to give equal consideration to recreation, livestock range, timber, watershed maintenance, fish, and wildlife. It also reduced the emphasis on increasing timber yields and introduced more stringent environmental regulations. Coupled with the Wilderness Act of 1964, which set lands aside as wilderness areas, and the ecological focus of the 1970s, the Forest Service began to give serious consideration to better managing the long-term effects of clear-cutting and logging. The Forest Service continued to use its administrative power to protect nearly 10 million acres in the following years.

Not surprisingly, forest products industries took issue with conservationist forces and demanded a decreased federal role in the management of timberlands. Many rural communities in the Pacific Northwest were almost completely dependent on forestry jobs by the 1980s. They found themselves caught between declining timber supplies, increasing regulations, and a diminishing need for labor-intensive harvesting methods. As the unemployment rate rose, many logging community leaders sided with the timber industry. The Forest Service found itself embroiled in protests and under threat of lawsuits from both sides.

In the late ’80s and early ’90s many complained about the Forest Service abusing its role as a steward of public land, citing increased logging of old -growth forests as the biggest issue. From 1987 through 1989, a record number of trees were cut in national forests – an average of over 12 billion board feet annually. In fact, the Forest Service spends more money cutting down trees than for any thing else, giving the impression to many people that the agency manages national forests primarily for wood production. With the current environmentally aware White House administration, many employees are hopeful that the USFS will return to a more ecological role.

Today the USFS oversees the management and protection of more than 191 million acres, or about two-thirds of all federally owned land. Forest Service headquarters are in Washington, DC, and smaller offices are scattered around the country to ensure that all national forests and national grasslands are managed appropriately.

Because of its role in public lands management, the Forest Service must balance the health of the forests with the interests of the various populations – human and non-human – that depend on these lands. The Forest Service defines its goals as “Protecting and improving the quality of air, water, soil, and natural beauty; expanding public understanding of environmental conservation; and promoting and achieving patterns of natural resource use that best meet the needs of people now and in the future,” something hopefully both environmentalists and timber interests will see their way to embrace.