On the Job: Park Ranger Careers

My typical day starts as early as 6 am or as late as 2 pm, and ends eight hours later. The day usually consists of giving two or maybe three programs to visitors, including a walk or maybe a more rigorous hike, a fossil program, or an amphitheater slide show. I may also work one or two hours in the visitor center and have a couple of hours of special project time during which my supervisor may give me a task to do. Or it may be time that I can use to prepare programs; for example, if I want to find a new place to lead a walk, I might take two to three hours of one work day to just explore. In that sense, I get a little bit of time to myself. 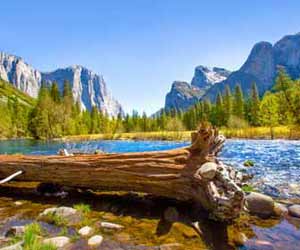 The major advantage of this job is that I get to live in a national park. It’s a huge advantage being able to live and work in the places that everyone else comes to vacation. And if being in the outdoors is your thing and you work in a natural history site as opposed to a historic site like a battlefield, you have access to amazing hiking, camping, and incredibly clean air.

My biggest tip on how to get hired is to call around. Call every park that you possibly can, if you think you might be qualified to work there and talk to the hiring official. Call back if you have to but talk to the person who hires, not the person who takes the phone calls. And I know that they really pay attention to who calls and who doesn’t.

The other big tip on getting hired is to volunteer first. That’s how I got hired. I’m an English major with absolutely no natural science background, but I volunteered here and they saw that I was good at it so they hired me for a paid position.

The other tip is don’t underrate yourself on the employment application. I clearly could do the job; I had done it the previous summer, and I rated myself honestly, but I still came up really low on the registry.

They could barely hire me, as I was near the very bottom of the list of people they were able to hire. And clearly I am competent to do the job. So don’t be too humble.

In my time off I do a lot of camping and hiking in the Black Hills and the surrounding parks. I like to get away from the Badlands on my days off because it’s such a beautiful area of the country and I like to travel as much as I can.

One of the other big advantages of the job is I’m working with a lot of people who really share my personal views of the environment and are into protecting it. You’ll get to know people who are supportive of this type of work and really believe in it and are willing to give their lives to it. I find it most interesting to be around people in resource education. A lot of people who do this work tend to have a college degree or higher, and yet, it tends to be a young crowd. So it’s fun, it’s a good group to hang out with, and you meet a lot of people and get to travel around.

It should be obvious why I like working here. It’s gorgeous. It’s a lot better than sitting in an office all day. Although, it’s not all leading hikes. You do have to work at the visitor’s center desk and deal with the public indoors a lot, but when you do get outdoors, it’s invigorating. You feel like you’re doing something. You watch as people are exposed to nature perhaps for the first time in their lives. I can think of three or four different occasions last summer during the night sky program, which is sort of like an astronomy program. I asked the group how many people here were from urban areas, and nearly three-quarters of the hands went up. I asked them where they were from, and I heard Dallas, Los Angeles, New York, Philadelphia, Detroit, and other big cities. And I said look up, what do you see. And this total hush just came over the crowd; I just knew that those people had never ever seen stars like this, like planetarium stars in the outdoors. To know that you are part of providing such an experience is really worthwhile.