The U.S. Fish and Wildlife Service (FWS), is the offspring of two separate government divisions. It has existed in its current form for over two decades. 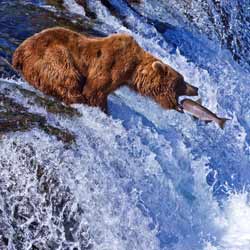 The older of its predecessor organizations was the U.S. Fish Commission, established in 1871. Spencer F. Baird served as the first commissioner of this independent organization, and its main function, as outlined in the act of Congress that created it, concerned investigation of the decrease in oysters, mussels, and other commercially valuable marine life. Later on, the Commission studied fish migration patterns, the effects of water pollution, red tide, and new methods of harvesting and processing fish. In 1903, the Commission was assigned to the Department of Commerce and re-named the Bureau of Fisheries. Its emphasis at this stage was primarily on protecting the fishing industry rather than the fish themselves. Through the early part of this century, the bureau also regulated sea lion, walrus, and whale harvests.

Fish and Wildlife’s second predecessor organization was established by an 1885 act of Congress that mandated the Department of Agriculture’s investigation of the relationship between birds and agriculture. The Office of Economic Ornithology and Mammalogy, later renamed the Bureau of Biological Survey, was established the following year. Its work covered four central areas involving mammals and birds: wildlife research, regulation, refuge management, and predator and rodent control. It investigated diseases threatening commercial fur production, predatory animals that attacked livestock, and rodents that raided stored grain. Around this time it also began to actively protect non-commercial animals, including big game in the western states and Alaska. In 1903 it established the first bird refuge, at Pelican Island, Florida, and it took over the National Bison Range from the Forest Service six years later. The ensuing wildlife refuge system expanded during the next three decades, relying primarily on funds raised through the sale of bird hunting stamps.

The Bureau of Fisheries and the Bureau of Biological Survey merged in 1940. Following World War II, the new service began to administer international fisheries and to help draft fishing treaties and agreements worldwide. In 1956, it was reorganized and renamed the United States Fish and Wildlife Service, and its operations were subdivided into a Bureau of Commercial Fisheries and a Bureau of Sport Fisheries and Wildlife to clarify the distinct mandates of the service – to preserve wildlife both for industry and recreation. Fish and wildlife programs continued much as before until 1970, when its commercial functions were reassigned to the Department of Commerce. From that time forward, the service was exclusively devoted to the conservation of animal life. Passage of the Endangered Species Acts of 1966 and 1973 made this agency responsible for maintaining a list of threatened and endangered species, acquiring land for their habitats, and restoring their populations. Finally, in 1993 the Service’s fourteen research facilities and their satellite offices were transferred to a new department called the National Biological Survey.

Today, the U.S. Fish and Wildlife Service administers 550 national wildlife refuges from the coast of Alaska to tropical Caribbean islands. These refuges cover more than 150 million acres and preserve pieces of virtually every kind of habitat necessary for survival of America’s wildlife. Fish and wildlife management techniques include regulated burning, grazing, eradication of non-indigenous vegetation, and water flow control. Because the service has historically focused on protecting fish and migratory bird habitat, most of its territory consists of waterways or wetlands. Forest lands under its jurisdiction are mainly found in the Pacific Northwest and Alaska. In addition to its extensive network of refuges, the service operates a host of fish hatcheries and thirteen research centers with associated field stations. All these facilities are designed to help fulfill the mission of the agency – “to conserve, protect, and enhance fish and wildlife and their habitat for the continuing benefit of the public.”