Nearly all large cruise ships are staffed with international crews and cruise under a foreign flag. For example, Carnival Cruise Lines, which has ships registered in Liberia and Panama, employs shipboard personnel from over eighty-five different countries. 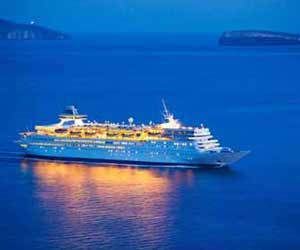 Royal Caribbean has about fifty-five to sixty nationalities working on its vessels at any given time.

With the potential clash of cultures and customs, how do cruise lines manage such diversity in the workplace? For the most part it is through training, tolerance, and old fashioned segregation. Yes, it’s true. Cruise ships do tend to segregate their workers. As one cruise line personnel officer puts it:

“On the big ships, they fill all of the unskilled positions [kitchen and housekeeping] with cheap labor from foreign countries. That leaves far fewer jobs for Americans, and they usually want someone with special skills: dealers from Las Vegas casinos, performers through Hollywood talent agencies, fitness instructors with shoreside teaching experience, or hosts with tour guide experience.”

This might sound discouraging, but cruise companies do vary in their hiring practices, and there are still plenty of jobs available on large cruise lines; you just need the right amount of persistence and determination. Furthermore, small, local companies tend to hire all-American crews. For the most part, non-English speaking employees work low-skill, low-paying positions such as kitchen staff, bedroom stewards, and janitorial positions. On many big-name cruise lines, these positions are filled almost exclusively with workers from Indonesia, the Philippines, and Korea. Of these lower skill departments, each is further segregated by hiring primarily one nationality or another.

This form of discrimination has been around since the early 1900s, borne out of the Passenger Service Act of 1886, a law forbidding foreign-flagged vessels from transporting passengers on one-way trips between ports in the United States. This law, intended to help the U.S. shipbuilding industry, proved to actually work against it. Registering a ship in the United States requires the ship to be built in the United States and staffed with an American crew. However, paying American wages and complying with U.S. employment regulations is extremely expensive compared to using employees from developing countries, who will perform the same work for a fraction of the pay demanded by North Americans. Foreign countries also subsidize their cruise shipbuilding industry, while the United States does not. As a result, almost all major cruise lines use ships built in Germany, France, and Italy, and then register them in countries imposing less onerous requirements on employers, such as Liberia and Panama. Some cruise lines even maintain recruiting and training facilities in places like Indonesia and the Philippines. According to one American cruise staff employee:

“The only Americans on the ship were the cruise staff and concession employees, like the beauticians, gift shop staff, and casino workers. All of the rest were from other countries, especially Korea and Jamaica.”

Foreign-flagged cruise vessels leave American ports on rather strange routes to circumvent the restriction created by the Passenger Service Act. 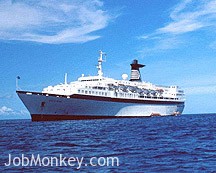 For example, Norwegian Cruise Lines ships leaving San Diego or Los Angeles must first visit Ensanada, Mexico, before traveling to Hawaii. Premier Cruise Lines ships setting sail from Tampa, Florida, must detour to the tiny Bahamian island of Cay Sal (the passengers stay on board) before arriving at their real destination: Key West, Florida. And most cruises to Alaska originate in Vancouver, British Columbia, rather than Seattle, Washington. Recently, Congress listened to arguments against this arcane law and is considering easing restrictions on foreign vessels. This could open up new cruise itineraries such as San Diego to San Francisco or, as Tampa officials would like, a luxury car ferry that would make a twenty-six-hour, overnight journey from their city to New Orleans. Any change in legislation is likely to promote more hiring of American crew members, so keep an eye on these developments.

Cruise Jobs for Americans – NEXT PAGE