Working aboard sailboats and yachts offers a different environment from large ocean liners and even riverboats. Yachts and sailing ships generally have smaller crews, so each member is expected to perform a greater variety of tasks. 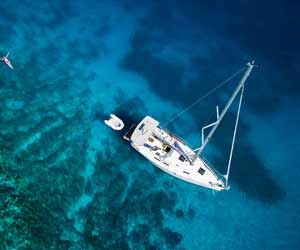 If it is an open-water sailboat, the entire crew will likely need to know how to sail and be expected to work the riggings and lines. On such a boat, a deckhand might also serve breakfast, clean cabins, and lead tours ashore. Many people prefer this variety to the same daily routine of the larger ocean and river vessels. Working aboard a large oceangoing vessel is much like working in a luxury hotel. On the plus side, they offer more space, facilities, and stability in rainy or cold weather situations. Aboard a small vessel, your relationship to the water will be more intimate, and bad weather will have a much more profound effect on both the crew and passengers.

Many of the smaller lines are registered in the United States and hire American crews, even for their entry-level positions and housekeeping staff. Moving up the ladder on smaller ships is also a lot easier than with the big cruise lines. For example, to become a purser with a major cruise line might take ten years of 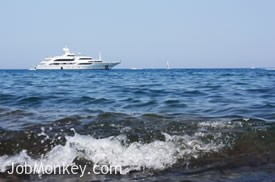 prior ship experience. However, small vessels have been known to hire college graduates with hotel and restaurant or accounting backgrounds and make them pursers immediately. Some smaller excursion companies also hire their cruise directors straight from their hospitality staff, or from tour staffs in their land tour and shore excursion divisions. So even if your ultimate goal is to be a cruise director with a major line, small ships might be the best route to gaining the experience you need.

Because of their ability to travel to remote, secluded areas, many smaller ships have found an appropriate niche for the environmentally aware ’90s market: “eco-touring.” Eco-tour itineraries typically involve some kind of nature and ecology-oriented cruises to primitive wilderness areas. Tours of the Northwest Passage along the British Columbia coast, Alaska, and numerous areas in the South Pacific and South America have become very popular. These cruises are a far cry from the luxury cruises featuring 1,200-foot ships with ballrooms and casinos. One eco-cruise director describes his ship this way:

“We use small, yacht-like cruise ships that carry no more than 100 people at a time. It’s an intimate, naturalist, educational style of cruising – there’s no band, and no discos, magicians, bingo, shopping, or casinos. We also don’t have black-tie dinners. Our entertainment consists of educational tours and lectures on local history, marine biology, ecology, and botany.”

“The focus of our trips isn’t on our ship. The boat is essentially a base for our tour operations. Our clientele is younger and more adventuresome than the typical cruise ship guests, and we organize lots of really active hikes and trips at our destinations. The atmosphere is pretty informal, with a lot of interaction between the ship’s crew and the passengers.”

While the jobs for most small cruise lines aren’t usually seasonal, they offer a great opportunity for someone who’s willing to take some time off from school or their regular job and see interesting new places. These jobs are rewarding and give a great taste of life at sea, but they can be difficult. As one personnel officer puts it:

“It’s tough work. You’re on duty every day, ten to fourteen hours, seven days a week, with six weeks on and two weeks off. There’s no place to go, no personal space, and not much free time. People are away from their home, their cat, their stereo, and their friends, and many people just aren’t cut out for the job.”

But according to one long-time cruise manager:

“We have a lot of American crew on our ships that work as deckhands, stewards, or maintenance people. Usually, they’re recent college graduates looking for a break and are eager to see places like Baja or Alaska in a unique way. The work can be tough, but the camaraderie is great, and with little to spend their money on, they save almost all of their income.”

Eco-cruises don’t usually hire traditional cruise staff, at least not in the sense of the entertainment-oriented staffs of the large cruise ships. Instead, they tend to hire for more lecture-oriented positions – a cruise director on these ships is much more likely to be at the bow with a microphone lecturing on passing sights than introducing a comedy act.

Some companies look for experienced tour guides or people who have worked as shore expedition personnel, to fill their cruise staff positions. They’re more interested in a person’s communication and organizational abilities than particular academic knowledge. There is a growing need, though, for lecturers and people with knowledge of the environment and biology. In addition to lecturers and naturalists, companies specializing in eco-tours will often hire expedition leaders. According to one former expedition leader at a successful nature cruise company:

“Our itineraries were very flexible, because we had so many small, out-of-the way ports to visit and we had to really work around wind and weather conditions, find where the wildlife was, and work with the captain on all the scheduling. Basically, along with the captain, I decided where to go, and organized all of the shoreside activities, the naturalist lectures, and the landings. It was pretty demanding, but I got fantastic management experience while traveling the world.”

Small ships can be more personal as well. You often get to know the passengers by name. The drawback is it’s not as easy to escape from your responsibilities. Having said that, if you don’t like being around people, you should probably reconsider going to sea on a cruise ship of any size.