If someone came up to you on the street and asked if you would like to live in a twelve-by-twelve box with a total stranger for six months, you’d undoubtedly
say, “No thanks.” Yet, at sea, this is done willingly. 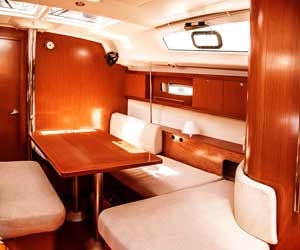 It’s true that accommodations are sometimes cramped, especially on smaller vessels, but the ship’s company is generally interesting and friendly. Many people compare it to their first year in a college dorm, without the homework.

On the larger cruise ships, most employees share cabins on one of the crew decks, and some people, especially the cruise staff, actually have living quarters in the plush passenger areas. Although some employees get single cabins, these are usually reserved for cruise staff with more seniority. Employees are usually separated by department, at least on the larger cruise ships. Cruise staff live on the same floor, kitchen and maintenance staff on another, and often the crew is further divided by nationality. Generally, the higher the quarters the better, since on some ships cabins below the water are somewhat noisy from the splash of water and hum of the engines.

Food for the crew gets mixed reviews from most employees. Some crews on smaller ships actually eat the same food as the passengers, but on the large ships, the crew almost always has their own mess hall. According to one recent cruise worker:

“We had several different messes on the ship: one for the Koreans, one for the American and European crew, and a couple of others. The food wasn’t very good and was always smothered in some sauce or another that I didn’t recognize, but it was certainly bearable. The bright spot was that we got lots of leftover dessert from the regular passenger meals, and once a week we were allowed to eat dinner in the restaurant free of charge, though we did have to tip and buy a drink. I guess it couldn’t have been too bad, because I still managed to gain some weight.”

Another cruise worker explains the entertainment that was provided for employees:

“There were movies for the staff, crew bingo games, and live shows to see. After you’ve seen the same shows a few times, though, it’s not so much fun anymore.”

Some ships provide extra amenities for employees, such as televisions for each room and special recreation lounges near the crew quarters. One employee even reported that her ship provided twelve new movies per week, all available on closed-circuit TV in the employee cabins.