Large ships traveling the world over definitely have their appeal. In every port, spectators line up dockside to marvel at these giant ships. Staff making their
way down the gangway are often interrogated by the curious crowds: “It must be a fabulous place to work! You’re so lucky. 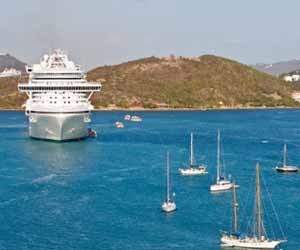 I’d give everything to work there.” Indeed, it’s impressive to be the recipient of such awe.

Big ships also have the distinction of being out to sea for longer periods of time, circumnavigating the globe. They take passengers to places most others can only dream about, and do it in high style. Large cruise lines often reposition their ships according to seasons or to entice different clientele. For example, several cruise lines send ships up to Alaska in the summer, then reposition them to the Caribbean in the winter months. How does a ship get from the pristine, glacier-clad waters of Alaska to the tropical, sun-drenched waters of the Caribbean?

Most schedule a longer cruise trip through the Panama Canal and along the South America coastline to the Mexican Riviera, with stops that include ports in Costa Rica, Belize, Cozumel and Cancun. Heading east from the Panama Canal, a cruise ship might make stops in Aruba, Trinidad, or Barbados. Other ships leave Alaska and cruise to the Hawaiian Islands and then to Asia before swinging back around to the Caribbean.

If working aboard a ship with marvelous amenities and fantastic ports of call is appealing to you, world cruise lines are worth investigating. However, keep in mind that working on a cruise ship for extended periods of time can result in a massive case of cabin fever, for which going ashore is the only cure. Time off will depend on your position and duties. Bigger ships have crews large enough to allow for a decent shore leave rotation so members can “escape” from passengers for a few hours.


Another characteristic of large cruise lines is that duties aboard big ships are more specific. If you’re working for Royal Caribbean, for instance, you’ll probably be in food service, working as a steward or generally doing something specialized. Actually, the situation is quite similar to the assembly-line system invented by Henry Ford. If one person builds an entire car, he or she will perform several tasks in the process. However, when 100 people are working on a series of cars, each person concentrates on a specific task, and, consequently, specialization for that skill occurs.

Not only is this system more efficient, its simplicity allows each worker to perform the task at hand with fewer mistakes. A quality product is practically guaranteed each time. When a bar steward, for example, is assigned to a bar, he or she serves drinks in that bar only. That employee is expected to do nothing but serve drinks every night. Again, this ensures that the drinks are well-made and that customer service is excellent. There is potential to earn a lot of money in this situation (the benefits of serving 1,500 tipping passengers, for example), but it’s also hard and often monotonous work.