Marce Ortiz works as a ship’s photo printer for Premier Cruise Lines aboard the Oceanic, which sails from Cape Canaveral, Florida, to destinations in the Bahamas. Getting a job on a cruise line sounded like a great change of pace to Marce. He applied to several cruise companies for a job as a photographer. Marce said getting a job was a lot easier than he expected. 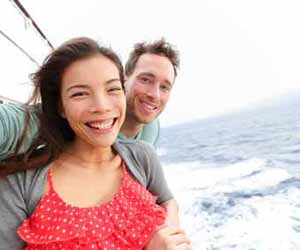 I sent out a bunch of resumes and expected to wait for a month or so, but within a week several cruise lines called me and set up interviews over the phone, which was great because the companies were in Miami and I live in California.

After my interview with Premier they asked if I could start in a week, and a week later they flew me to Cape Canaveral to start work.

Of course, getting hired isn’t this easy for everyone, and Marce says he had several things going for him when he applied:

I had already worked in a one-hour photo lab for a few years, so I knew a lot about developing and printing before I applied. Premier hired other people about the same time that had little or no experience in photography, but I’m sure my experience helped. I also had really good timing. I applied in early December, and I think a lot of cruise lines lose employees near the end of the year, plus there was a lot of turnover in the photography department about the time I got hired.

Once on the ship, Marce discovered that working at sea was a lot of fun, but getting comfortable with the strange schedules and workload took a few weeks:

At first I worked so much that it seemed like I never did anything else.

I started as a photographer, but the photo printer quit after a week and all of a sudden I had to learn to operate the printing machine, so I worked slowly for a while. The manager knew it was difficult, though, so they put me up in a hotel in the Bahamas for a couple of days so I could switch ships and train with another printer. After learning the ropes on that ship, I went back to the Oceanic and was a lot better at the job. The hours were still tough; we never had a full day off and it seemed like I spent all of my time off sleeping.

A lot of people seemed to quit during the first two weeks because shipboard life is so different, and they weren’t used to the unpredictable schedules, but once past this adjustment period people stayed for quite a while. I began to really enjoy my job and worked with a lot of fun people. I also learned to work faster and get more free time. In fact, sometimes I had trouble thinking of things to do when we were in port since I’d already seen most of the tourist spots in the Bahamas.

We run all of our cruises out of Cape Canaveral, so while in port I usually go to the mall, mail letters, make phone calls, and take care of personal matters. There isn’t a whole lot to spend your money on when you’re at sea, since your room and board is paid for, so most people manage to save a lot of money.

Premier is famous for its emphasis on children and hires a lot of youth counselors to care for children while their parents are in port. Marce found the atmosphere fun and enjoyed the passengers for the most part:

The management at our company is really great. Our ship is affiliated with Warner Brothers Studios and caters to the family market, so we have costumed characters of Bugs Bunny and Daffy Duck on board, and a lot of our photographs are of the kids with the characters. During spring and early summer we get a lot of college kids instead of the usual family crowd, and the atmosphere gets pretty wild-we even hire extra security guards for the spring break crowd. It’s a great change of pace, but I’m glad it’s not like that year-round!

We were allowed free use of the gym to work out, and we could go to the bar and hang out with friends, but I usually used my free time on board to catch up on my sleep. About the only thing we couldn’t do was use the pool, which didn’t bother anybody. After about six months you start getting tired of ship life , though, and my manager could sense that I needed time off and sent me shoreside, where they paid for my flight home. After a few weeks I came back to work and felt great.

Many crew members of the Oceanic, including Marce, were assigned to rescue teams and underwent safety and rescue training. Marce was even involved in a rescue at sea:

We came upon a capsized sailboat one day and actually got to use the rescue procedures we’d learned. The people had been drifting for two days and claimed a shark had actually attacked their boat. They were really dehydrated and suffering from exposure and were sure glad to see us. I also took a lot of pictures of the rescue that the company later used for publicity. It really reminded us that we were actually at sea.

I would definitely recommend working on a ship to anyone who wants to travel and save lots of money. It just takes persistence and good timing to get a great job on a cruise line.

Cruise Line Jobs – Are they for you?