Much of China is made up of mountains and plateau areas. Tibet, a region in southwest China called the “Rooftop of the World,” is home to the highest 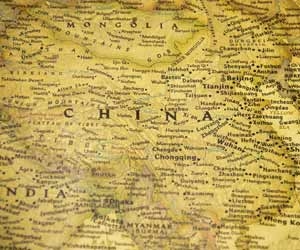 mountain on the planet, Mt. Everest. Much of the country’s interior is plains, and the rivers that criss-cross the land are major
trade and travel routes.

Being such a large country, China has huge variations in climate. From the humidity of the south to the subzero winter temperatures of Inner Mongolia, the traveler should be prepared for anything. Be sure to pack sunglasses, warm clothes,
and an umbrella wherever you go. Be prepared for any climate, but don’t weigh yourself down with too much luggage. Chinese people keep warm wearing padded silk or cotton clothing, which is readily available wherever it’s cold. It’s much better to buy necessary clothing and equipment there than bring everything with you.

The Chinese government is communist and has been known to wield
Big Brother – like power over its citizens. The pro-democracy rallies reflect a healthy population’s hopes for change, but the government’s responses to those protests and to accusations of human rights violations show that being under the global spotlight does not necessarily mean conforming to outsiders’ ideas of what China should be.

Although China is officially an atheist country, there are large numbers of practicing Buddhists, Muslims, and Christians.

Underlying much of modern Chinese life are elements of Confucianism and Taoism.

The Chinese form of currency is he yuan. Since China eliminated the two-currency system (i.e., renminbi or RMB) the people’s money and foreign exchange certificates (FEC) or “orange cards” – used only by foreigners – are no longer issued. A combination of your residence card and your teacher’s identification card should allow you to pay local rather than foreigner prices for things like museum and park entrance tickets, hotels, and
possibly transportation. These discounts are important when traveling, as they could save you a ton of money. To be extra sure, get a letter from the foreign affairs office at your school explaining your employment status.

China is not an expensive country, but as a Westerner you’ll often be paying
foreigner prices because many will automatically perceive you as being rich. Most teaching jobs in China pay enough to live on, to travel during the New Year holiday, and to get yourself home, but they will not make you rich. Your salary will likely be close to those of your Chinese colleagues, but as many schools provide free accommodations, you may in fact be better paid than your Chinese co-workers.