Indonesians as a group are friendly, outgoing people, always willing to help; however, it does help to have a bit of cultural knowledge before your arrival.

Many schools encourage social interaction and on weekends students often visit instructors at home. It’s a great compliment to have guests over. If they do visit, don’t turn them away. 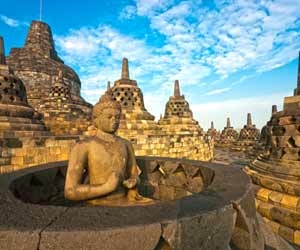 It’s polite to drop what you’re doing and focus your attention on the guests.

It may seem cute the first time an Indonesian child calls out, “Hello Mister!” or a teenage boy asks where your husband is, but you’d better get accustomed to it. A Westerner is bound to attract stares, especially away from the big cities. At times it may seem you can’t escape it – you’ll be stared at on the bus, in restaurants, walking down the street. Women especially should be prepared to attract stares; when traveling it might be easiest to join up with a male fellow traveler. If asked “Are you married?” (“Sudah kawin?”) it’s best to respond with “Belum,” or “not yet.” Indonesians don’t understand why a woman would not be married. In general, it’s best to go with the flow – getting angry won’t do you a bit of good (see “Aggression,” below).

Most Indonesians don’t outwardly express anger and will often continue to smile in the face of an upset Westerner. Avoid prolonged periods of eye contact with an Indonesian, as it could be taken as a signal of challenge. It’s also very important not to stand with hands on hips, as this is a sign of anger or aggression. The thumb inserted between the index and middle finger is how Indonesians “flip the bird.” It is considered very strong language and will offend anyone at whom it is directed.

One woman who spent a year teaching English in Indonesia talked about the nuances of Indonesian negotiating:

“They avoid direct relations. Being direct is considered impolite, and you’ll get nowhere if you try to argue. They go at their own pace, and you just have to hang tight and not get upset.”

Patience and surrender are useful tools for the Westerner in Indonesia. Don’t expect to do there what you do in a typical day at home. Business practices are very different than in the West; it might take weeks or months before a deal is actually closed. This rubber time, or jam karet, is normal, so patience is a virtue.

Take a more laid-back attitude – relax and smile – it’ll all get done in time.

As in most Asian countries, public displays of affection between opposite-sex couples are a no-no in Indonesia. Alternatively, don’t be surprised to see Indonesian men and women holding hands with members of the same sex. This is a sign of genuine friendship, not sexual preference. In general, remember that too many pats on the back or extended eye contact while talking can sometimes be misinterpreted.

Dress modestly but with regard to the heat and humidity. Loose, cool, comfortable clothing is the key. Tailors are everywhere in Indonesia and very skilled and affordable. They can copy just about anything and provide a cheap and easy way to increase one’s wardrobe.

Shorts and tank tops on men or women will not be looked on favorably, except perhaps in tourist enclaves like Kuta Beach on Bali. Women especially should take care not to wear revealing clothing; even at the beach a bathing suit is considered inappropriate. In the classroom women should wear skirts or pants and men should wear nice shirts and slacks. Ties are usually not required except in the most formal of circumstances, but you may want to pack one for interviews and special occasions. We heard of a teacher at a well-known English school who was called into the office because students complained that her tops were too tight.

The average Indonesian home doesn’t have a shower or bath, but rather a bak mandi, a water basin built into the wall of the bathroom. In the bak mandi floats a plastic scoop which is used to pour water over the body while standing on the floor of the bathroom (not in the bak mandi). This is very refreshing when the temperature is sizzling. It is not uncommon to take these three or four times daily to cool off. Indonesian toilets are of the squat variety, and though toilet paper is sometimes available, it’s important that it be disposed of in the trash, not the toilet (their plumbing systems can’t handle it).