Korean food tends to be spicy and Koreans say that the food matches their temperament (walk around the streets of Seoul on a weekend night and you’ll see what they mean). Side dishes like rice, radishes or bean sprouts (panchan), soup, and a main course of meat or seafood (and sometimes vegetables) are served at every meal. 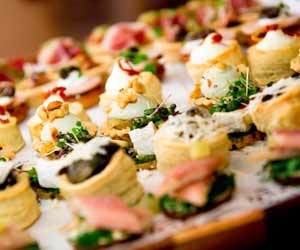 Rice and soup are eaten with a spoon, but all other food is eaten with chopsticks. Unlike in Japan, in Korea it is considered rude to lift your soup bowl.

Eating out can be very reasonable, especially in the areas around major universities. You can eat well for a mere US$5. Outside the student areas, a typical meal averages about US$8.50. A popular treat is eating at a bulgoki (fried beef) restaurant where the meat is cooked on a grill in front of the customers. The custom is to take the seasoned meat, wrap it in a piece of lettuce with a clove of garlic, add a little hot sauce, and try to fit the whole thing in your mouth. Bulgoki restaurants are a little more expensive, but well worth the splurge. There also are numerous Japanese and Chinese restaurants in South Korea. If you’re craving a reminder of home, Western restaurants range from very chic Italian and French eateries at the better hotels to standards like McDonalds and KFC. If you’re a vegetarian, say “gogi opshi” when you order your food and meat won’t be added.

Cooking at home is also a good solution.

Supermarkets in South Korea are easy to use and some, like the one in Yeonhui-dong in Seoul, carry a large supply of Western goods.

It’s a good idea to avoid tap water unless it’s boiled (as it usually is in restaurants). Bottled water is relatively inexpensive and available at most convenience stores. Also, use caution when eating food from street stands or soju tents. The sanitary conditions are often questionable and you could get sick.

The following dishes are both tasty and economical: