As a gaijin (foreigner) you won’t be expected to know all of the local customs and probably won’t offend anyone with your lack of Japanese social graces. Any effort you make to fit in will be appreciated, so keep the following customs in mind.

When invited to a Japanese home, be it that of a friend or an official homestay, it is customary to bring a gift, or omiyage. 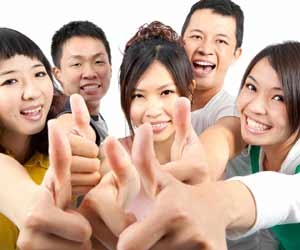 We suggest bringing some small trinkets, like key chains or baseball caps, from home for this purpose. Gift-giving plays an important role in Japanese culture, so make sure you have something on hand in case you receive an unexpected gift and want to reciprocate. It’s also customary to bring back souvenirs for friends and colleagues when you go out of town. The gift should be between two and five dollars in value, and make sure it’s from the region you visited – your friends will notice if it’s not!

In Japan, every business relationship begins with an exchange of business cards, or meishi. As soon as you know your permanent address, have some business cards printed, preferably with English on one side and Japanese on the other. Expect to receive many business cards during your stay in Japan. You should receive a business card with both hands and bow subtly, yet graciously. Read the card with great interest, perhaps commenting on a particular character, or kanji. Simply taking the card and putting it in your pocket or wallet is considered rude.

The bow is firmly embedded in Japanese culture. You will become used to it after only a short time in Japan. The Japanese bow when they meet and part from one another (when Westerners would use a handshake), to express gratitude, to show deference to superiors, and in many other social situations. The type of bow depends on the relationship and social or professional ranking of the people involved.

As a foreigner and newcomer to Japanese culture, you will be exempt from strict bowing etiquette, but the more you assimilate the better.

You will be expected to remove your shoes upon entering many Japanese buildings, including homes and even some English schools. The reason is more practical than traditional, since it helps to keep the inside clean. You may be provided with slippers, but they must not leave the house and they must be removed before walking on tatami mats. Be sure that you are wearing presentable socks!

You will catch on quickly to the subtleties involved with eating and drinking in Japan. If you have never used chopsticks, start practicing immediately. Using chopsticks is fairly straightforward. Remember that upon finishing your meal, you must place your chopsticks across your dish or on the side, and never place your chopsticks in your bowl or standing up in your rice. This is done only at funerals, so to do it at any other time is considered disrespectful.

If you go out for drinks with friends or colleagues, you will notice that each person takes turns filling the other’s glass. It is considered rude to fill your own glass except when you are among good friends. You might also notice that your glass will be continuously filled even if you say “no, thank you.” Leave your glass full once you have had enough to drink. It’s customary to split the bill evenly among everyone at the table, no matter how much you’ve had to drink or eat.

Before eating or drinking, it is customary to say “Itadakimasu.” This term, roughly translated, means “good eating to you, I am starting to eat.” It is considered rude to start a meal without saying “Itadakimasu.”

Bathing in Japan verges on ritual – especially when compared with “showering” or “taking a bath,” as it is generally understood in Western countries. It is important to pay special attention to this custom if you are living with a Japanese family or if you use the public baths. Washing yourself is only a prelude to taking a bath. Japanese begin by soaping and scrubbing before entering the tub (where you will find a shower-like apparatus or a faucet and a wash tub). The bath, or ofuro, is used only for soaking – the most relaxing part and the heart of the bathing ritual. Every evening, after getting squeaky clean, you can sit and relax neck-deep in very hot water. Do not put soap or bubble bath in the ofuro.

Japan is a very homogenous nation. In many areas foreigners are rarely seen. Although it is rare that the Japanese will treat you with any sort of maliciousness, be prepared for stares and unusual personal questions. Whether you are Chinese-American, African-American, Latino, Caucasian, or even Japanese-Canadian, you may encounter racial prejudice in Japan.

Be prepared to confront racial discrimination when looking for an apartment, especially if you are not Caucasian or if you are looking outside the larger metropolitan areas. You may be rejected without explanation – many Japanese landlords simply will not rent to gaijin.

Wherever you go in Japan, foreigners are subject to a different set of rules. Some Westerners who have been in Japan for years and speak the language fluently become extremely frustrated because they realize that they’ll never be completely accepted into Japanese society. Most English teachers don’t stay long enough to reach this point; for a relatively short-term stay it’s best to keep in mind that the Japanese double standard is not entirely negative since you won’t be expected to strictly conform to rigid Japanese social mores.