Baccarat has a reputation as a “gentleman’s” game and one for the high rollers. With dealers dressed in full tuxedos and tables often roped off or physically separated from other gaming tables, the impression most people have is of a game somehow reserved for a more sophisticated crowd. In actuality both high rollers and more reserved gamblers can play. In fact, this is a game that should attract the masses. 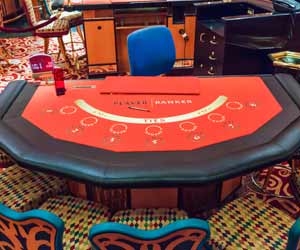 In baccarat the casinos have a low advantage over players – approximately 1.17 percent to 1.36 percent.

Invented in Italy and popularized in France, baccarat continues to be played in Europe as chemin de fer or chemmy, better known by the American slang term “shimmy.” Americans first tried chemin de fer in the early part of this century and decided it was too tedious and confusing. Sometime in the late 1950s or early 1960s, the game became known as baccarat, from the French alteration of the Italian term baccara, meaning zero. Once the game was introduced to Las Vegas casinos, the rules were altered so that only the casino could bank the game instead of one player against all others as in baccarat’s original form. Although chemin de fer, double table baccarat, and mini baccarat are played at many casinos, the following rules refer to the game’s most prevalent form: American baccarat.

The typical baccarat table is shaped like an elongated oval, numbered one through fifteen, with seven positions at either end of the oval (the number thirteen is always left out).

The game is played with either six or eight decks of cards with a rather simple object: get as close to a total of nine as possible. Ace through nine cards are given their respective point values while face cards and tens count as zero. There are only two hands played by the entire table: the “Banker’s” and the “Player’s.” A hand in play cannot total more than nine. When a hand does go over, ten is subtracted from the total. Although the scoring of the game is complicated, the rules are clearly written and placed at every table.

The game begins with an elaborate, ritualized shuffling of the cards. Personnel working this game include two dealers seated together at the center of the table, a caller standing at the table across from the dealers, and a ladderman, supervising the action from a chair above the table. The two dealers and the caller take turns mixing the cards, after which the deck is given to a player to cut.

Next, one of the dealers will flip the top card to reveal the value of the card, which dictates the number of cards to be “burned” (removed from play).

Once these preliminaries are over, players bet either on the Banker’s hand, the Player’s hand, or on the possibility of a tie. The shoe (wooden or plastic rack holding up to eight decks of cards) passes to the player in the seat numbered “one” after the caller says, “no more bets.” The player holding the shoe and dealing is termed the “Banker” and can only bet on the Banker’s hand. (The shoe will move counterclockwise as soon as there is a winning Player’s hand.)

After receiving a nod from the caller, the Player deals a card face down from the shoe, which is the first in the Player’s hand. This card is given to the caller, who either gives it to the bettor with the most money on the table or keeps it if there is not a highest bet. The second card is the Banker’s card and is placed next to the shoe. A third card goes to the caller, who keeps it or passes it on, and the last card is left with the first Banker’s card.

The caller “calls out” the rulings on the hands as the players sit and wait. After one more card for either hand, if necessary, the game is over and the highest-scoring hand wins. Those who bet on winning Banker hands, however, owe a 5 percent commission to the casino. The seated dealers pay off the winning bets and keep track of the commissions by placing markers in trays in front of them for each respective seat number (each seated dealer handles one side of the oval). Players must pay commissions owed before they leave the table.