Coming to the New World, the first European colonists brought with them not only the will and determination to lay claim to the land, but their affinity for games of chance. 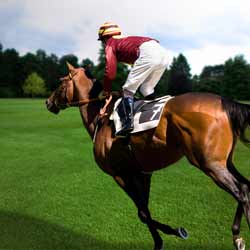 Horse racing, cockfighting, and county-sponsored lotteries (similar to today’s state-sponsored lotteries) fueled an appetite for betting and wagering by the country’s new population. Lotteries, in fact, were so popular, they quickly generated huge revenues for fledgling county governments. Lottery money funded many civic projects, including the building of colleges and universities. Harvard, Yale, Dartmouth, Princeton, and Columbia all owe their existence, in part, to the gambling passion that swept the country at the time.

With the acceptance of lotteries, horse racing, and, in the South, cockfighting, gambling houses and halls soon became commonplace, especially in areas considered outposts for the colonial expansion efforts. Even George Washington and Benjamin Franklin got into the act, printing and selling playing cards. Near the start of the American Revolution, almost every household in this new land had at least one deck of playing cards. And taxing tea wasn’t the only thing igniting the ire of colonists. Since playing cards were selling so well in the States, the British placed a tariff on the cards, as well as on tea, with the infamous Stamp Act of 1765, a measure that ultimately led to the Declaration of Rights, signed by nine colonies opposed to taxation without representation.