After the Revolutionary War, all manners of gambling continued to flourish, meeting little opposition from lawmakers and the public in general. 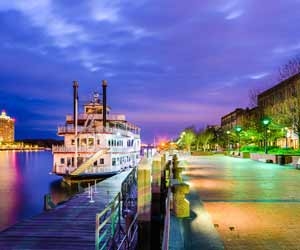 During the early 1800s gambling on riverboats along the Mississippi and Ohio Rivers became fashionable. From New Orleans to Cincinnati and all points in between, magnificent floating palaces graced the waters with genteel sophistication. Women strolling the outside decks would wait for their male companions inside the ship’s smoky parlors, chasing dreams of fame and fortune. Most of these early steamships and paddlewheelers operated as a way for people to gamble in comfort and style. They also afforded passengers a pleasant means of transportation. In other parts of the country, especially in urban areas such as New York and Chicago, gambling halls began to see a more refined and social clientele; they were often frequented by members of the upper class who could afford to lose big. As a result gambling halls grew rapidly, changing into large, complex organizations run on business principles rather than Lady Luck. They also became major employers, positively impacting the surrounding neighborhoods. Gambling became an integral part of the atmosphere in the frontier cities of the West as well.

And so it went throughout much of the nineteenth century: rich and poor, young and old, city dwellers and homesteaders shared a common interest in gambling. The wealthy choose the sport of roulette or horse racing; the poor, three-card monte; cowboys and gold rushers, poker. But whatever the game, the results were the same. The citizenry embraced gambling, found it exhilarating, amusing, challenging, and of course, at times frustrating, but always moral and legal. So what happened to change public opinion? What caused gambling, a pastime tightly woven into the fabric of early American society, to suddenly become illegal in most of the country?