Officially founded in 1905, the same year the railroad came to the area, Las Vegas started out as little more than a dusty rest stop for the railroad workers who were stationed there. But not long after the last spike was pounded into the ground, the town boasted newspapers, banks, ice plants, brickyards, and 1,500 permanent residents.

Around the same time, a land rush started by Las Vegas Land and Water Company created the first of many “booms” this area would experience.

Between 1911, the year Las Vegas was incorporated, and 1929, the little town that could grew at a slow, but steady, pace. General urban improvements and anticipation of a power-producing dam on the Colorado moved more money into the area. The Boulder Dam (later renamed Hoover Dam) project alone provided thousands of jobs when the Depression made work scarce. As a result Las Vegas’ population increased by 50 percent and multiple private and public construction projects brought new vitality to the city, giving it the push needed to make it to the big time. Add the legalization of gambling in 1931 and “Dateline Las Vegas” became a staple in newsreels all across the country.

Fast forward to the 1950s. Las Vegas had grown into a world-class resort town, recognized as a mecca for high-stakes gambling and glamour. But the city also had its problems, namely organized crime. Legendary gangsters such as Benjamin “Bugsy” Siegel and others caused Vegas to gain an unsavory reputation for easy money and excess. In addition cases were documented of casino profits going directly into the pockets of East Coast Mob figures – and sometimes disappearing altogether. All this illegal action and notoriety eventually attracted the attention of government leaders, who started placing pressure on gaming establishments to clean up their acts.

Jumping to the 1970s, a lot of Las Vegas’ earlier problems with organized crime began to disappear as established corporations and individuals like Howard Hughes invested in the city. The 1980s saw another boom in development, as the adult theme of Las Vegas softened towards a more family -type atmosphere, and giant theme resort hotels offered more than just gaming activities. The word got out. Growing numbers of people visited Vegas through the ’80s and ’90s and that trend continued past 2000 (until the economic downturn). How many new monster casinos opened up during those years? We don’t have enough space to list them all!

Today, the city is home to many of the largest hotels in the world and over one million people. In addition Las Vegas has the advantage of no state income tax, low property taxes, low unemployment, and great weather almost year-round.

The best way to get to all this action is to fly. Las Vegas is generally a long drive from all major cities in the western United States. Many airlines fly into McCarran International Airport and almost all offer discounted or special rate. Major airlines that go to Las Vegas include United, Delta, Northwest, Continental, and American. The airport is only about five miles outside of town . If a bus is your mode of transportation, Greyhound has routes from San Francisco, Los Angeles, San Diego, and Salt Lake City, with stops in-between. Additionally, Amtrak offers service from the same cities for a few dollars more and deposits you right downtown at Union Station.

Once you’ve staked your claim in Las Vegas and have joined the other locals, you can look forward to a community that values the family, civic involvement, and ranks among the ten “Best Places to Live Today,” according to Money magazine. You have also joined the fast lane in terms of local growth. The strong economy has made it a very popular place to live. Can thousands of new arrivals a year be wrong?

As a resident of this glittery wonderland, the mystique and excitement of gambling will probably wear off. Never fear. The city’s surrounding areas offer extensive activities as well. If water is what you are looking for, check out nearby Lake Powell, Lake Havasu, and the largest manmade lake in the United States, Lake Mead. All offer plenty of wet activities including fishing, boating, wind surfing, and jet skiing. Or, go climb a mountain starting with the 11,918-foot Mt. Charleston. The world famous Red Rock Canyon has some of the best hiking in the country and Lee Canyon, part of Mt. Charleston, offers skiing in the winter. Las Vegas also has its share of sports teams, including hockey, AAA baseball, and college teams. Extensive golfing, tennis, and bowling complete a seemingly endless list of things to do.

Getting around in such a sprawling place is surprisingly a snap. The Citizens Area Transit (CAT) provides around-the-clock bus service between downtown and the residential valley. Constantly updated and expanded roads keep cars moving smoothly.

Many people also come to Las Vegas for an education. The University of Nevada – Las Vegas (UNLV) and the Community College of Southern Nevada have good reputations in the academic arena. Both are close to downtown and offer a quality education in post-graduate and graduate work. Schools at all levels, from elementary to college, are a priority to Las Vegas, as it continues to expand and attract new residents.

New residential areas have sprung up everywhere, especially east and west of the city’s core. These new developments often resemble the stucco-and-tile sprawl that is the trademark of southern California, and with good reason. A substantial number of new residents are from the Golden State. 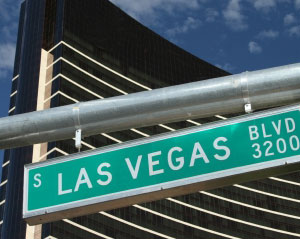 According to Department of Motor Vehicles, a high percentage of all the out-of-state licenses collected last year were from California.

West Las Vegas used to be known as the “wrong side of the tracks.” But today with a housing boom on, this area has been transformed from vacant desert lots and honky-tonk taverns to a bustling suburbia of well-planned residential communities and retail centers. The largest real estate development in the area is Summerlin, a 39-square-mile planned community that was actually the brainchild of billionaire Howard Hughes. It also wears the title of fastest-growing community in country. Summerlin is so vast that when it is finally completed in 2020, it is estimated that 80,000 homes will spread over thirty different village neighborhoods. It is located only 15 minutes from downtown Las Vegas, at the edge of the Spring Mountains. In addition to housing West Las Vegas is where you’ll find the Southern Nevada Zoological Park, Las Vegas Art Museum, and the Nevada State Museum and Historical Society. And if you really want to kick up your heels, check out the largest dance floor in the Las Vegas at the Gold Coast Hotel.

To the east of the Strip sits a low-key residential area known by locals simply as “the Eastside.” Here you’ll find great neighborhood restaurants, a few big-name casinos such as Sam’s Town and the Showboat, Huntridge Performing Arts Theater, and scenic golf courses. But perhaps for some the biggest draw to the Eastside is the Liberace Museum. Inside, you’ll find an collection of outrageous costumes, props, and possessions owned by Mr. Showmanship himself. Favorites include a piano-shaped ring encrusted with 260 diamonds, a red, white, and blue Rolls-Royce, and a Baldwin grand piano covered with thousands of mirrored tiles.

Location: Clark County, which includes Las Vegas, Henderson, and Boulder City, covers 7,910 square miles, which is just a little larger than New Jersey state. Las Vegas itself is encompasses 91.76 square miles. It is located in the southern corner of Nevada, close to where it meets Arizona, and about 300 miles from Los Angeles and 600 miles from San Francisco.