The Growth of Riverboat Casino Gambling

Currently, only a handful of states allow gaming parlors and casinos on riverboats. Most operate on the Mississippi, Ohio, and Missouri Rivers. The first state to reintroduce this type of gambling facility was Iowa in 1989, when legislators passed a law permitting riverboat casinos under certain circumstances. According to this measure, gambling in Iowa may occur only on historic or modern riverboats, making cruises on the Mississippi River lasting a specified period of time (usually an hour and a half). Slot machines and table games are allowed. 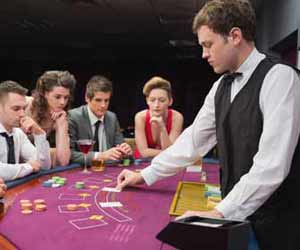 In Illinois, the second state to authorize riverboat gambling, casino patrons may also board riverboats making regularly scheduled runs; however, they must wait until the boats are fully underway before engaging in gambling activities. Games allowed include blackjack, craps, roulette, and big six. Slot machines and video poker also are permitted. Illinois riverboat casinos, all of which must charge a boarding fee to their customers, have the potential to be very plentiful , as they may cruise on any number of major rivers, including the Mississippi, Des Plaines, Ohio, and Illinois. Casino operators here have also been very successful in presenting Las Vegas – style entertainment, generating even more customer traffic. At the industry’s peak more than 10,000 new jobs were created in Illinois after the legalization of gambling on riverboats, with an estimated yearly payroll in excess of $250 million.

As a legislative condition for riverboat gambling in Mississippi, the state requires that each county first decide whether or not to approve it. Several counties – Adams, Claiborne, Handcock, and Tunica – were among the first to give the green light to riverboat gambling. It’s probably no coincidence that these counties were at the time also four of the poorest in the state. Mississippi riverboat casinos differ from those in other states in one major way: They must be permanently docked. Rather than based on boats, shipboard casinos sit on stationary barges, connected to land by gangplanks. Often this set-up allows more space to be devoted exclusively to gaming activities than on traditional riverboats. In fact, Mississippi at one time ranked second in the world in terms of casino space. Both slot machines and table games are permitted, and whereas other state governments limit the total number of riverboat casinos allowed to operate within their states, Mississippi provides unlimited licensing.

Two areas in Mississippi that initially struck it rich through the reintroduction of legalized gambling are the Biloxi/Gulfport region and the tiny towns of Tunica and Robinsonville in Tunica County. Both have several major casinos, including big-name operators such as Circus Circus, Sam’s Town, and Harrah’s.

In Louisiana legislators determined that while gambling would be permitted, it could only be conducted on fully operational ships of at least 120 feet that have the appropriate historical look of the nineteenth-century paddleboats. Modern models lacking the appearance of vintage paddlewheelers would not qualify as a legal venue for gaming activities. In addition the riverboats must make regularly scheduled runs and be large enough to hold at least 600 passengers. Currently the maximum number of riverboat gaming casinos allowed in Louisiana is fifteen. However, the city of New Orleans recently received a special waiver from the state legislature allowing a limited number of land-based casino operations there. Look for this city to quickly add new casino operations now that the legal framework is in place.

Passengers hoping to do a little gambling on Indiana riverboats should be prepared for a long time out on the water. Boats offering gambling activities must cruise for approximately four hours. (Of course, employees as well had better be ready to spend a considerable amount of time away from dry land.) The state also allows passengers to gamble thirty minutes before and after the actual cruise. Indiana gaming riverboats may be either historic or modern vessels of at least 150 feet, accommodating a minimum of 500 passengers. All types of table games and slot machines are allowed.

The last state (so far) to legalize riverboat gambling has been Missouri. Both modern and historical riverboats may qualify for gaming licensing. However, there has been much debate in the state as to what gaming activities actually should be allowed. The Missouri State Supreme Court ruled that games such as blackjack and poker may be permitted because they involve a measure of skill and not just luck, whereas slot machines and other specialty table games are prohibited because winnings depend primarily on luck. Even with these seemingly restrictive regulations, over twenty-five casino operators have filed for licensing with the Missouri Gaming Commission. Expect many to begin operating soon, if not already.