Roulette, the oldest casino game still in existence, originated from other wheel games popular during the Middle Ages. It gained widespread popularity in Europe, especially in France during the late eighteenth century. By the early nineteenth century, roulette – which is French for “little wheel” – made it across the Atlantic, introduced to the United States by professional gamblers who adapted many European games to suit American tastes. 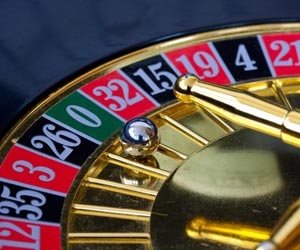 One of the main reasons for roulette’s relatively low appeal in the United States is that most American casinos utilize both a zero and a double zero on the roulette wheel. European casinos only use one zero. The house advantage of American roulette becomes 5.26 compared to 2.70 in European roulette, making American roulette the game with the poorest odds for the gambler out of the four basic table games of blackjack, craps, roulette, and baccarat.

The average American roulette table employs one dealer who stands next to the wheel. The wheel, approximately three feet in diameter, consists of thirty-eight individually numbered cups around its perimeter. Half of the cups, numbered one through thirty-six, are black and the other half are red, while the zero and double zero cups are both green.

Each numbered pocket is divided from its neighbors by separators. Red and black cups alternate around the wheel, but the numbers are randomly placed. Often the wheel will be semi-enclosed by a clear, plastic shield that guards against tampering by anyone. There are usually five to ten player chairs around the table. The roulette table can become rather crowded, with players reaching over one another to place bets on the table.

While cash may be played at most roulette tables, the typical player opts for roulette chips. The roulette chips cannot be played at other casino games and often cannot even be used to play at a different roulette table. After the player places cash or casino chips on the table, the dealer will push a stack of colored roulette chips to the player. Each player receives chips of one color, different than the chips of the other players, so that everyone can keep track of their own bets. The chips do not show denominations but are all valued at the minimum chip amount. A sign posted at the table will list the minimum chip amount as well as minimum bet limit. In addition, players are often required to buy a certain amount of chips. For example, a table may require a player to buy $20 worth of chips valued at $1 each and to wager $5 for each spin of the wheel. Players may also negotiate with the dealer if they desire a higher denomination for their chips.

The dealer starts a game by spinning the roulette wheel clockwise and then rolling a small ball on the rim of the wheel counterclockwise. Players place their bets until the ball slows down and the dealer says, “No more bets.”

There are a variety of ways to place bets at the roulette table, more than in any other casino table game.

On an “inside wager” a player places chips on or within the boundary lines of the numbered squares. In an “outside wager” the player places chips in any of the boxes outside of the main rows of numbers. A player can then place either “even-money bets” (odd or even, red or black), “dozen bets,” or “column bets” at the far end of the layout opposite the zero and double zero (see figure). While complex combinations of bets often ensue as players seemingly throw chips all over the table, the process is actually very straightforward. Compared to other casino table games, roulette requires no special betting etiquette or ritualized procedures. Players simply place their chips on various spots along the table layout to designate their bets for that game. The payoffs then depend on the wager method.

As the ball slows down it bounces in and out of different pockets, eventually landing in one numbered pocket. The dealer places a marker on top of the winning number on the layout. He collects all the losing bets first and then pays off the winners. While European roulette dealers handle the chips on the table with a rake (which is where the expression “raking in the chips” originates), most American roulette dealers use only their hands.

The action at a roulette table rarely becomes heated or overly loud since neither the dealer nor the players have any control over where the ball will land. (Gamblers from time to time claim to have worked out systems for beating the wheel, but to date none has proven effective.) Most players remain seated and few speak to one another or to the dealer. Some say that since no skill is involved with this game, the most interesting aspect about it is the hypnotic spell the wheel seems to create.

On The Job – Blackjack Dealer (NEXT PAGE)