Poker can be traced to the early seventeenth century when a variation of the game was played by the Persians in the form of as-nas, a five-card game. 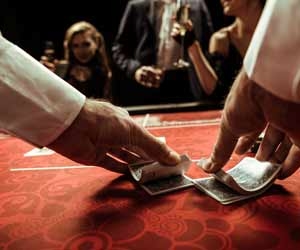 French immigrants who had been in the military in Persia introduced poker to nineteenth-century America. Poker then spread throughout the States via riverboat gambling, establishing itself as a national pastime after World War I, when it became one of the Army’s favorite card games. Poker is played by over 65 million Americans who spend well over $100 million a year on the game.

In a low poker game whoever has the lowest hand wins – the lowest hand being ace, two, three, four, and five. In this version straights and flushes don’t count. The only concern is the relative ranks of the cards.

Poker involves not only luck and skill but the art of illusion. A good player will fearlessly bluff, learn “false carding,” which is taking fewer cards than necessary in order to trick other players, analyze the “tells,” or behavioral characteristics, of other players, and develop deceptive tells of his own so no one knows for sure what type of hand he is holding.

The object of any poker variation is to win the “pot,” or the money that collects in the center of the table. Cards are dealt clockwise to each player and a few rounds of betting take place, during which players may call (make a bet equal to the previous bet), raise (match and increase anther player’s bet), or fold (remove her hand from the game), all in clockwise order. Then at the “showdown” point, players remaining reveal their hands. There are two ways to win the pot: either by having the best hand or by forcing all the other players out of the game through aggressive betting.

Since so many poker versions exist, each with differing rules, the following discussion briefly reviews the rules of the games most often encountered in American casinos.

Casinos employ dealers for poker games in order to guard against cheating. In versions where position is important – such as in draw poker where the dealer bets last and therefore has an advantage by seeing what others have wagered – a small button is rotated among the players to designate the imaginary dealer. Players must play with casino chips, although coins can be used for the ante (the mandatory bet before the start of a game, which is often 10 percent of the minimum bet), and there is usually a minimum buy-in amount. Players cannot buy casino chips once the game is underway, playing instead with whatever they have on the table. There is also a sign at the table that lists the two-tiered betting limit (for example $5 – $10). The two amounts refer to the bets before and after certain betting rounds. The casino either charges an hourly fee or takes a percentage from the pot, and there is often a sign near the table indicating this percentage.

In stud poker games some of the cards are concealed while others are revealed to all players, and there are numerous rounds of betting. In draw poker games all the cards are hidden and there are only two rounds of betting. Seven-card stud is one of the most popular poker variations. It is dealt with two cards facing down and one facing up. After the first round of betting, three more cards are dealt separately facing up, with a round of betting after each card is dealt. There is one more card dealt facing down, a last betting round, and then the showdown.

Another game that is gaining popularity in American casinos is let it ride poker. It’s based on five-card stud, but in this game players sit at a table in which there are three betting spots in front of them. There is usually a $5 minimum bet per spot. The number of players at this game doesn’t matter and everyone at the table can win. That’s because you’re playing against a pay table and not against other players or even against the dealer. Like other poker games, the action can become intense, with 60 to 70 hands being played an hour. The object of this game is to produce the highest poker hand out of the five cards dealt. At the start of the game, each player is dealt three cards down and two cards up. The player then has the choice to bet on his current cards or pass on the bet, which means forfeiting the first card of the two that were dealt face up. Players may continue to bet in a variety of ways just as in stud poker. After all bets are made, all the cards are shown and winning hands are paid off.

The most popular version of low poker is aptly named lowball. Each player receives five cards face down. The players then bet on their hands, discard and receive cards if necessary, bet again, and then compare hands.

Texas hold ’em poker is one of the fastest-growing poker games in American casinos because of its high action and big money potential. First, players bet on the two cards that are dealt to each player face down. The dealer then turns over three cards used by every player to form their hands. Again, betting follows. Two more community cards are revealed by the dealer, followed by subsequent betting rounds before the final showdown.

In five-card draw, poker’s most traditional version, players receive five cards, dealt facing down. After a round of betting, players may discard up to three cards and receive new ones from the dealer. They then bet on their new hands before the showdown.