As honest people engaged in the sport of gambling and its popularity took root during the nineteenth century, a climate of respectability and trust between gamblers followed. 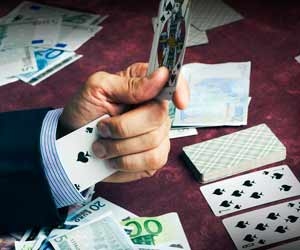 Yet, it was this very same atmosphere that made it easy for unscrupulous characters to ply their trade of deceit. Preying upon the unsuspecting, cheaters and con artists began bilking money from honest folks. The more gambling grew, the more it produced these unsavory side effects. And grow it did. By 1850 New York City was one of the primary gambling centers in the country, with no fewer than 6,000 gaming establishments. In San Francisco, they numbered well over a 1,000. It only stands to reason that this proliferation would bring a downside; what’s surprising is that it would cause public perception of gambling as a whole to tumble almost as fast as a roll of the dice – from a legitimate activity to immoral, illegal behavior.

Lotteries, held in high esteem during the 1700s and most of the 1800s, became tainted by poor management and political corruption. Meanwhile, scams involving “sharpers” (con artists) and card cheaters increased, especially on the riverboats. In the West, the story repeated itself, along with tales of gunplay and bloodshed for both honest card players and cheaters. Denver, Deadwood, Tombstone, and Cheyenne all experienced their fair share of gunslingers and gamblers, as well as an assortment of hustlers, thieves, prostitutes, and thugs. In the minds of many law-abiding citizens, incidents of fraud, mayhem, and even murder became closely associated with the act of gambling.

By the early 1900s, the perceived association of criminals with gambling advanced an attitude that the games of chance themselves were sinful. Gambling reformers seized this shift in perception as an opportunity to successfully change laws pertaining to the gaming industry. By 1915 almost all of the East’s once-famous legal gambling establishments, racetracks, bookmaking houses, and numbers operations were shut down. When the West’s wild and woolly territories applied for admittance to the Union, they were forced to pass rigorous anti-gambling laws. However, for some people, the desire to gamble did not fade. They continued to participate in a pastime they enjoyed. But instead of attending legal gaming establishments, they went underground and small gambling syndicates developed as a result.

After Prohibition went into effect in 1920, banning the sale of all alcoholic beverages, these minor syndicates evolved into an arranged, national system of illicit activities. Known today simply as organized crime, members of this group quickly profited from bootleg alcohol and illegal gambling. Through ruthless greed and battles for control of territory, “the mob” often left horrific crimes in its wake. In 1933, after years of bloodshed and the country in the midst of the Great Depression, Congress ended Prohibition. Gambling, however, remained illegal with one minor exception – a sparsely populated desert state with a reputation for bucking standard conventions and going its own way.