During the Han Dynasty of China two thousand years ago, a man named Cheung Leung invented a game in which players tried to match a set of characters with those randomly drawn. Legend has it that this game was responsible for financing the building of China’s Great Wall. 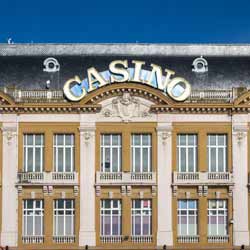 In its earliest version choices consisted of 120 Chinese characters taken from Confucius’ Thousand Character Book. Later, the number of characters was reduced to ninety, and when Chinese immigrants brought the game with them to America, where it became wildly popular, it was further reduced to eighty. Since reading the Chinese characters was an obvious problem for non-Chinese, eighty Arabic numerals gradually replaced the original characters.

Keno was one of the first games to be introduced when Nevada legalized gambling in 1931 and still ranks as one of the state’s most popular games, even though it typically gives the house a 22 percent to 40 percent edge over the player. Professional gamblers often refer to it as a “sucker game” as it is based on pure luck and requires no real finesse.

This game greatly resembles many of the state lottery drawings that have become popular in recent years. Players first obtain a blank keno ticket, which consists of eight lines, each with ten numbers in consecutive order. They then select numbers listed on a card, using various betting formulas. On a “straight ticket” (the most basic keno wager) the player marks up to fifteen numbers. Each selection or group of numbers is known as a “spot.”

A player who decides on a six-spot on a straight ticket would “X-out” six different numbers, write “6” on the far right side of the ticket (for six-spot), and then write the wager in a box on the top right-hand corner (dropping the dollar or cent sign). If a player wagers $3.50 and all six numbers catch, he wins $5 ,500. In most casinos the maximum prize amount is $250,000, while the minimum bet required is 75″ to $1. Players must not only make bets before new numbers are drawn, but must also collect winnings before the calling of the next game. A player can either collect the winnings himself or give the winning ticket to a keno runner, who will bring back the payoff.

If a player wishes to use identical numbers in more than one game, he can return the ticket to the keno writer who then writes out a duplicate for the next game.

Keno was once dismissed by Strip casinos as a blue-collar game and relegated to downtown establishments. Now many casinos, Strip establishments included, have replaced former entertainment lounges with a keno lounge, an area consisting of rows of seats with armrests, ashtrays, and cups holding crayon for marking the keno tickets. The seats all face the keno counter. One can relax and sip complimentary drinks delivered by the cocktail servers working the area.

Behind the keno counter sit the keno writer(s) and the operator. The keno writers handle the tickets turned in, mark down the numbers, and take care of the financial transactions. The keno operator sits above and behind the writers. She starts the keno game by pressing a button to begin mixing the numbered ping-pong balls in a large transparent bowl. The balls are then drawn up by air and out of the “goose,” a long, transparent tube extending up from the bowl. Each number is called out by the operator as it is drawn. The numbers are displayed on an electronic board in the front of the lounge as well. Once all twenty numbers have been drawn and called, the game is over. Unlike its relative, bingo, a keno game is over whether or not there is a winner.

It is not necessary to play keno in the lounge. Restaurants and other public areas in most casinos will have keno runners (who used to be predominantly women) collecting keno tickets from patrons. The casinos have come to realize that keno attracts players who are bored between shuffles at card games or spins at the roulette wheels. Keno has also become a fun diversion with casino-goers waiting for food service, since keno boards are located in most eating areas.