Can A Robot Recruit Better Than You?

Are robots better at recruiting than humans? It’s a big question in the world of recruiting right now. As a business owner or as a professional recruiter, it’s something that directly effects you. 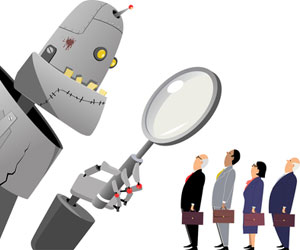 No one knows exactly what the future will hold, but robots and technology are definitely making a major impact on the recruiting scene. In this post we’ll shine the spotlight on robots vs. recruiters to see who will make the better hiring decision.

For the longest time, humans were the decision makers for all hiring decisions, but now technology plays a role too. Whether you realize it or not, technology already helps you with your day-to-day recruiting needs (ATS systems, candidate screens, etc). It’s highly likely that technology and robots will increase their role in recruiting in the near future.

How To Recover From A Bad Hire

Through the use of complex algorithms and cost effective placements, technology is quickly changing the way you recruit. In short, technology streamlines the hiring process by making it systematic and efficient. But can robots do a better job than humans?

The biggest difference between recruiters vs. robots is that technology doesn’t usually make mistakes. Humans do. Robots are programmed to do exactly what needs to be done and nothing more. There are no emotional ties or social intelligence that affects their decision making. By utilizing big data, robots can theoretically always pick the best candidate – or can they?

Let’s take a look at recruiting technology to see if a robot can recruit better than you. Robots can:

Robots can essentially automate the entire hiring process, but they still have trouble with one thing: relationships. When it comes to hiring the best person for the job, it’s important to identify job candidate’s personalities to see if they will fit in the job and in the culture. If you don’t do this, it can cause headaches later on.

How To Become The Best Recruiter Ever

By meeting job candidates in person, recruiters can make a personal connection. They can identify things, like passion, creativity, or potential – things that big data overlooks. Plus, a job candidate wants to meet a person, not a machine when they show up for the interview.

In the future, as technology continues to develop, robots may become the best recruiters ever, but they have a lot to learn before they overtake humans. In the meantime, use the technology that exists out there. Embrace its pros and cons, but also know that it has it’s limits. Recruiting isn’t a science just yet, its still an art form. That’s why humans will continue to excel in the world of recruiting.